An apology letter to the family of spiders I murdered today in cold blood and warm bleach.

I was rearranging the apartment when I found you all living in a tiny community upside down in the front left corner of some DIY shelves that I turned into a TV table. You must have been as shocked as I was. The last time I checked the little room the cabinet was in there was no sign of you. Due to the young age of a lot of you, I imagine most weren’t even hatched at that time, so let me share some world truths.

This is MY house

Rather, this is an apartment I’m renting. Either way, it’s my name on the door, and the bills. If you want to talk about squatter’s rights and “I was here first”, let me remind you it was people who built the shelving you’re nesting in, albeit a bit crookedly, and built the building it’s in. If it wasn’t for my kind, you would be out in the bad weather getting blown off twigs and having your webs pissed on with rain. You wouldn’t even have made it to this generation. There would be slim pickings on asshole mosquitoes in these end of summer storms, and the birds – another crowd of dickheads, singing around my bedroom window every morning like those homeless guys around the flaming barrel in Rocky – could chow down on some tasty terror-on-eight-legs with ease. 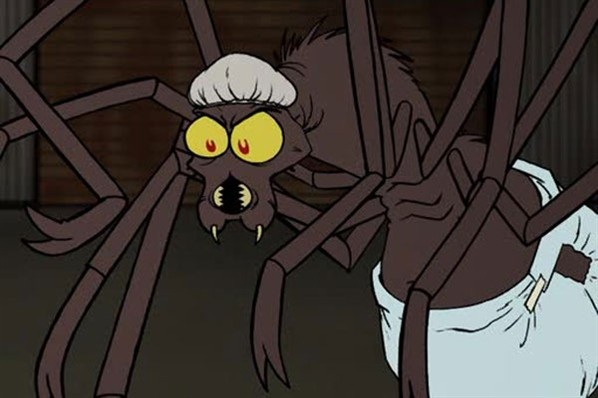 A spider, in a nappy. Still awful

Because you are frightening. I have the greatest respect for spiders and arachnids as a species, but you generate a very understandable amount of horror and revulsion in a lot of people just by existing. You guys evolved to be best predators you could be, with loads of genius and horrible ways to catch and eat your prey. Experts in construction, zen-like patience, eight eyes and at least 582 movies, you have us paying attention, but you scare my girlfriend. She screams sometimes when she spots you doing the Trainspotting Baby Shuffle across our ceiling, and I don’t want that noise in my house or my ears. I likewise didn’t appreciate that time in the bathroom when I turned on the light to see one of you (I know that might come off as racist [genus-ist?], it might have been a completely different type of spider but in my fear and ignorance you all get lumped together) on the mirror over the reflection of my face. Which looked like you were on my face.

Think of it as a pre-emptive strike. A lot of you had been born, and the mamma was a horrible spindly looking thing. I wasn’t going to let you all grow up under my nose, crawl into my underwear when I’m sleeping or have a movement in my mouth while I sleep, like some type of Spinne Fetisch. If you could learn to live here discreetly, where I don’t have to deal with your bullshit, maybe something could have been arranged. Maybe something in a few square inches behind the water heater, or the corner properties in the hall, but no, you had to be out in the open above the bed, or set up your little spider trailer park in the cabinet. That means I have to wake up or put away what I’m doing to go and deal with you. It might have helped your case if the bug problem around here got sorted out, but you couldn’t manage that part of your life either. The spider:dead mosquitoes ratio is crap. I’m driven to a fucking bloodlust rage by at least one mozzie blowing nature’s vuvuzela in my ears every night as I try to sleep. You haven’t earned your place here, and I hold no great hopes for you in the future, so you have become expendable.

It is how it is. Neither of our species is ready to live in peace with the other, and our differences are too vast to be bridged. Even with a mutual enemy, we couldn’t resolve our differences. Maybe I was too heavy handed, swooping in and slaughtering an entire family, like some wound-up grunt from a Vietnam movie. Possibly, but you hang your prey up and suck the juices out of them over a period of time that could be considered pretty long for a creature that only lives a day or three, and that’s terrifying.

In case you didn’t hear, there’s a war on terror.