What is it about climate change that puts the blinders on people? People get crazy about it, on both sides. The advocates of change want recognition of the problem, followed by some hasty solutions, and are portrayed to us as fringe scientists, conspiracy buffs and hippies. A large number of politicians and captains of industry, who are lovely fantastic trustworthy people as they have shown again and again, the world over, show their reams of data compiled by the best (and best paid) researchers and climatologists, stating it’s all a sham. That the temperature differences, the global increase in storms and unusual events related to climate change, and the melting ice caps are down to cosmic rays, unreliable models and a miscalculation, respectively. The effects, negligible as they are, would not be felt for generations.

So why shouldn’t we continue pissing it all against the wall, we don’t have to deal with it. Leave it for the maid, who in this case represents our pancultural descendants. Or the next lot in line for the throne, the ants. Let those bitey bastards sort out the waste continent floating in the ocean, and let them scour the septic beaches of the world, further inland than we would recognise. They can mutate and adapt their little insect lungs or whatever to breath in the poisonous muck in the air and convert it into something useful. What did that bacteria they found in that lake live off of? They’d probably love it.

An immediate change is necessary? I don’t know, man. I’m watching documentaries and reading articles from last year to seven years ago, and most seem to point towards our windmill in the next two years. Interestingly enough, 2015 is tipped to be the best year for the U.S. production of oil since Carter, but even after ignoring the Kyoto Protocol, their emissions apparently went down exactly 5.2%, the amount agreed on in 1999. The Kyoto Protocol expired for the first time on December 31st, 2012, by the way. I guess world leaders are a bit superstitious about emissions.

Point of no return 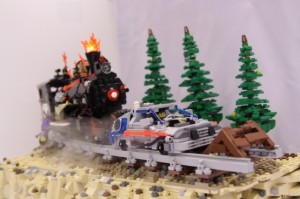 Back to the Future, in Lego

The people who are going to march on September 21st (2014 if there’s anyone in the future reading old entries) will be ridiculed in a good swathe of the media and public houses, along with said public’s tendency towards short term focus rather than open thinking about the future, real talk. They also have to adhere closely to the route laid out for them by the city of New York, which leads them away from the UN meeting and across the river.

Radicals and radical environmentalists could be planning something more than a publicity parade, designed to grab the attention of the world leaders and the public eye and heart. Better be careful though boys and girls, radical environmentalism is only one degree of Kevin Bacon away from domestic terrorism. As written on the FBI website,

“Domestic terrorism is the unlawful use, or threatened use, of violence by a group or individual based and operating entirely within the United States (or its territories) without foreign direction, committed against persons or property to intimidate or coerce a government, the civilian population, or any segment thereof, in furtherance of political or social objectives.”

You know how they feel about terrorism in New York.

All the relevant links are below. Anybody got any thoughts or comments?